As you’ve probably gathered, Haley and I are fascinated by church history. When I was a sophomore in college, I took a class with the late Robert Webber – surely one of the saints who has gone before. He pointed us towards the rich wisdom of ancient Christian worship, and my understanding of the faith I had grown up in was transformed. I should probably say that it was broken wide open. In some ways, I’ve been trying ever since then to find myself on the grand pilgrimage, and in the master story of, the church.

Reading about church history, learning the old stories, visiting the places where God has moved in the past – these have all been central to my faith. I’d like to think it has kept me moored to something larger than myself. It seems fitting, then, to spend a little time in the week following Reformation Day/All Saints’ Day reflecting on a space I have dearly loved, and would love to share with you.

So. London. London is quite possibly my favorite city on the planet. I simply love it. And while there are hundreds of ways to while away a happy afternoon in the capitol of Albion – most of them involving tea and scones – I think every London trip requires a pilgrimage to Westminster Abbey. The first, the second, and the fiftieth visit alike. 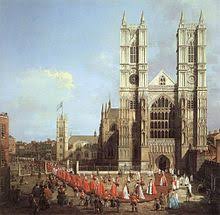 If you’ve never been there, Westminster Abbey is the place where British royals are crowned, married and (most significantly) buried. So are quite a few other notable Brits across the ages. Apart from being a simply gorgeous and iconic church, it is literally rich with history: the people who populate the pages of British history are interred below its floors and within its walls.

(In fact, my first visit there was unsettling: I was walking around, among, and on top of some incredibly imminent bones. And my belief in the resurrection made the experience even more vivid. Someday, Edward I, William Wilberforce, Issac Newton, Mary Queen of Scots, and Oscar Wilde are all going to wake up in the same place. I was struck by just how weird and amazing and beautiful the doctrine of bodily resurrection really is.)

I have two favorite spots in Westminster Abbey: the Lady Chapel and the Poet’s Corner. The first is a chapel added behind the choir by Henry VII as a tribute to Mary the mother of Jesus.

What makes it so compelling? In a small room to one side, buried (literally) on top of one another, are Elizabeth I and her sister Mary I. Mary was Henry VIII’s daughter with Catherine of Aragon and a devout Catholic; she ascended the throne after her Protestant brother Edward VI died as a boy. Mary fought to return English worship to its Catholic roots. It was during her reign that Thomas Cranmer was burned at the stake, and hundreds of other Protestants were imprisoned, executed, or fled. After Mary’s death, Elizabeth became queen and the Church of England was established as solidly Protestant.

What’s profoundly moving about this (impressive) tomb for two queens, though, are two inscriptions. The first, in Latin, translates:

Partners in throne and grave, here we sleep, Elizabeth and Mary, sisters, in hope of the Resurrection.

Nearby, on the floor, is this stone:

I’ve never been so convicted of the deep sadness God must feel over the divisions in the church as I did in that small room, reading those polished stones, in an ancient cathedral. The first time I visited the tomb, I wanted to sit down and weep. (They don’t let you do this, by the way. A friendly but firm Jeremy Irons, who narrates the audio guide, reminds you that the space is crowded and visitors need to keep moving along.)

Across the chapel, also to the side, is another small room. In this one, Mary Queen of Scots is buried. She was a legitimate claimant to the English throne during Elizabeth’s reign, as well as devoutly Catholic. She was executed on Elizabeth’s orders. After Elizabeth’s (childless) death, Mary’s son James became king of England and had his mother interred in a throne no less splendid than her rival’s. It stuns me to think that these three women – who in turn imprisoned and persecuted one another – will one day be resurrected side by side. The fractured and painful history they shaped will not have the last word.

The wideness of God’s mercy clearly goes beyond our imagining.

I also love the Poet’s Corner. It’s an alcove of the Abbey where great English poets are buried or remembered. I wish the tour guides would let me just sit awhile on the stone honoring WH Auden, meditating on its inscription:

“In the prison of his days, teach the free man how to praise.”

My children are too little, still, to appreciate the Abbey — or John Wesley’s house, or the burial yard at Bunhill. But the stories, aspirations, hopes, blunders, and crimes of those buried there are their inheritance. They need to be able to find themselves in those stories and learn from them. I want them to learn to give thanks to God for where they see him acting in history,  and to pray for remedies to all the old wrongs that the stories tell. Most of all, I want them to see all those stories as part of his story – the true story of the whole world – and to long to act out their part in his drama with freedom and grace.

And I want it for myself, as well. Which is probably why I find myself drawn to these stories, these spaces, over and over again.

What about you? What are the spaces and stories where you’ve felt your own intersection with God’s ongoing story?

One thought on “The Inheritance of Church History”