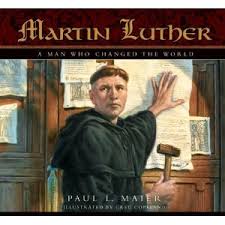 Reformation Day is coming up on October 31: it’s been 493 years since Luther posted his theses for debate on the door of the Castle Church and started a revolution in Western Christendom. Lutheran, Catholic, Reformed, Baptist – whatever your ecclesial identity, if you’re a Christian in the West, your experience of the faith has been shaped by the Augustinian monk who just wanted to know how to stand before a righteous God. His answer, found in his reading of Paul–our only righteousness is the righteousness of God, granted to us in the death and resurrection of Jesus Christ–turned out to be a word of spiritual, social, and political freedom in western Europe. Whether you share his theological convictions or not, we all inhabit the world he helped create.

Paul Maier’s picture book biography, Martin Luther: The Man Who Changed the World is a great way to introduce elementary-age children to this extraordinary man. The book has a lot of text, as befits a complex theological and historical figure, but it’s readable and accompanied by lavish illustrations. It’s not perfect (what is?): the telling is highly sympathetic and tends at times towards hagiography. Overall, though, it’s a beautiful introduction to a pivotal character in church history.

Maier recounts the major movements in Luther’s life simply and economically. On the whole, this is done well, such as in the elegant summing up of Luther’s tower experience: “In St. Paul’s letter to the Romans, Luther read that God’s righteousness (his holiness) is a gift to those who believe in Christ as their Savior. Paul explained that this righteousness was not only God’s own perfection, but something he gave to people who were sorry for their sins and believed in Christ.” Life-changing gospel theology in picture book form! That alone helped me live with some of the flaws of the book: an oversimplified account of indulgences, for instance, and the implication that Luther drew the Church back to basing its beliefs on “the Bible alone,” which is an imperfect account of sola scriptura.

I’ll admit: I’m in love with theology and church history, and I was disappointed at first that Maier didn’t deal more fully with Luther’s theology and some of his more, ahem, problematic moments (the Peasants’ Revolt, later polemic against the Jews). But then again, I don’t think that’s a picture book I’d read to my kids.  (“Look, kids, it’s the Muenster rebellion!” ) Martin Luther, on the other hand, is a lovely introduction to a man who staked his life above all else on “Jesus Christ, and him crucified.” It would make a wonderful family read in the days leading up to Reformation Day.

In fact: if you do read it with your family, let me know! My kids are still too young, and I’d love to hear about the conversations it prompts.