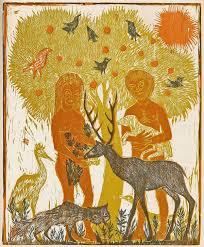 One of the pleasures of an afternoon library visit without my kids is the liberty to really peruse the shelves. Closely. Like sitting down in the aisle, and pulling volumes off one by one. Flipping through them, seeing what catches my eye, the way I did when I was a kid.

On my last visit, while looking for something else, I chanced across an older volume, simply titled Adam and Eve, with a fantastic woodcut print on the front. I had to pull it out: I love woodcuts. Something about woodcut prints puts me in mind of medieval altarpieces: the simple, almost primitive figures and lines are so charged with feeling and meaning. If you ever lose me in an art museum, just check the medieval rooms first, with all the stern Christ-babies and stiff Pietas; failing that, see if there’s a special woodcut exhibition happening. I’ll be in one of those rooms.

Anyhow, at first I was just going to glance through the illustrations and put it back. But as I read, I was charmed despite myself and decided I wanted to share it with all of you for inclusion in Aslan’s Library.

Why share it? Three things in particular, and they may be because this is an older book (published in 1968). In the first place, I thoroughly enjoyed being immersed in Eden, with Adam and the animals. The Genesis story is one we’ve all heard a thousand times, close enough to know it by heart. Most of the time I hear it without seeing or sensing it at all. In fact, all of the creation books I’ve recommended in the past have grabbed me because they help me break through my familiarity and actually experience the story. Adam and Eve is no different. “Purple figs, golden apricots and peaches clustered under the green leaves” of the trees in Eden. A hawk circles; a flamingo balances; and “gazelles turned their great soft eyes toward Adam.”  It’s a fresh, attentive telling of paradise — Gwendolyn Reed is unabashed in using language that gives delight.

Secondly, the woodcuts. If woodcuts aren’t your thing — they’re kind of the antithesis of much children’s illustration today — give them a shot. They have a way of making a familiar story distant and strange, yet they are vibrant and full of life. Like I said: I can’t get enough of them. Helen Siegl’s are thoroughly compelling.

Lastly, the subtle expression of the story’s climax. This is one of the simplest but most nuanced retellings of Genesis 3 I’ve come across. There’s no attempt to explain it or place it in context; as in Scripture, the story is just told. Eve is overcome by the desire to be godlike. Adam joins her. They get their wish, and it ruins them: “Never could they walk in the shade of the great trees where Adam had talked with God. Always on their lips was the taste of the forbidden fruit. As well as joy they knew sorrow. In their lives they knew both good and evil.”

This isn’t a perfect book (I wasn’t nuts, for instance, about God blowing a soul into Adam, like he’s a water balloon) and it’s out of print, but it is absolutely worth tracking down. At last check, used copies were fairly inexpensive on Amazon, and major libraries ought to have copies available. You can also email the good folks at Hearts and Minds Books; they’re good at digging things up! If you do find it, let me know what you think. Especially about the woodcuts!