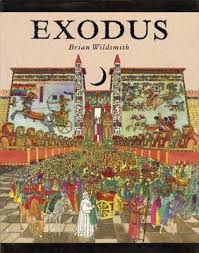 Some of you may remember that I love Brian Wildsmith’s work. My first encounter with it, actually, was last summer at our lake home – Haley’s niece asked me to read her Joseph one lazy, hot early evening. Together we admired the pictures, and then got into an involved discussion about Joseph’s tactics with his brothers: why did he send them back, but keep Benjamin behind? Why did he hide the silver cup in their things? And my easy assurance with the story wilted rather quickly under the intense perplexity of a 6 1/2 year old. We finally had to track down her grandfather, a pastor, to help us out.

Certain Bible stories crop up again and and again in childrens’ picture books (Noah’s Ark, anyone?), while others don’t lend themselves as easily to cartoonish illustrations and smiling animals. (Of course, by now, you probably know how we at Aslan’s Library feel about such things.) But my experience last summer reminded me that while children are diverted by “kid-friendly” re-tellings, they are genuinely engaged by truth well and beautifully told.

As with Exodus, Brian Wildsmith gives a straightforward retelling of the Biblical narrative in his account of Joseph. Again, he eschews the temptation to focus on the sensational bits – the coat of many colors, Potiphar’s wife – and simply, soberly recounts the story in all its tragedy, strangeness, and beauty. What we remember after reading this book isn’t the coat; it’s Joseph’s giftedness in interpreting dreams, and his tortured but ultimately redeemed encounter with his brothers. In other words, it’s God at work in Joseph’s life.

One particular thing I like about this volume: the illustrations of Egypt are so similar to those in Exodus. My daughter loves Exodus, and I know she’ll notice the similarities. It’ll be a great opportunity to talk about the stories as bookends: in Joseph, God’s people are providentially led into Egypt (as was Jesus!) for deliverance from famine ; Exodus is the story of God’s deliverance from slavery in the very same Egypt. God’s ultimate kingship and provision for his people stretches above both stories and binds them together. It’s nice to have two volumes, both worthy of closely poring over, to help reinforce the theological connection between the stories.