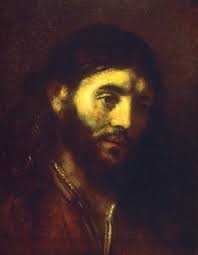 Maybe he looked indeed
much as Rembrandt envisioned Him
in those small heads that seem in fact
portraits of more than a model.
A dark, still young, very intelligent face,
a soul-mirror gaze of deep understanding, unjudging.
That face, in extremis, would have clenched its teeth
in a grimace not shown in even the great crucifixions.
The burden of humanness (I begin to see) exacted from Him
that He taste also the humiliation of dread,
cold sweat of wanting to let the whole thing go,
like any mortal hero out of his depth,
like anyone who has taken a step too far
and wants herself back.
The painters, even the greatest, don’t show how,
in the midnight Garden,
or staggering uphill under the weight of the Cross,
He went through with even the human longing
to simply cease, to not be.
Not torture of body,
not the hideous betrayals humans commit
nor the faithless weakness of friends, and surely
not the anticipation of death (not then, in agony’s grip)
was Incarnation’s heaviest weight,
but this sickened desire to renege,
to step back from what He, Who was God,
had promised Himself, and had entered
time and flesh to enact.
Sublime acceptance, to be absolute, had to have welled
up from those depths where purpose
drifted for mortal moments.

One thought on “Salvator Mundi: Via Crucis”