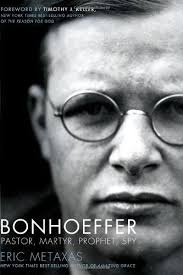 An admission: this new biography of Dietrich Bonhoeffer is not, technically speaking, a children’s book. It is reviewed in the Wall Street Journal, sprinkled with German words, has an extensive bibliography and endnotes, and clocks in at 542 pages. However: Eric Metaxas’ Bonhoeffer is an absolutely riveting read, and I wish someone had given me something like it when I was sixteen or seventeen years old. If you have, or know, a precocious teen reader, this is a book well worth placing in their hands – and reading along with them as well.

Dietrich Bonhoeffer was a German pastor who came of age as his country began to emerge from the national disaster of World War I and the Weimar Republic. As Metaxas illustrates so ably, he came from a family of great distinction and prestige in German society. He studied in Berlin and at Union Seminary in New York, and was a man of deep and abiding faith in the transforming, costly grace of God in Jesus Christ. He saw, earlier than most, the threat that National Socialism posed to Christianity in Germany and to civilization itself. He played a major role in the  Confessing Church’s resistance to the Nazi “German Christians”; in the ecumenical movement of the 1930s; and eventually, as a resistance spy within the German Abwehr, in a plot to assassinate Adolf Hitler. For his role in the assassination attempt, Bonhoeffer was arrested and eventually martyred at Flossenburg in 1945.

What makes this book an especially excellent choice for a teen reader? First, Metaxas keeps the story moving with the pace of a novel. There is good historical work done here, but he is first of all a storyteller. Even though I know how the story ends, I was holding my breath through the retelling of Bonhoeffer’s final journey to Flossenburg: “maybe, this time, he’ll get away!” Second, and more importantly, Bonhoeffer’s life is utterly compelling and thoroughly inspiring. That may sound cliché, but it’s true. Metaxas does a fantastic job of making clear the connections between Bonhoeffer’s theology and his life. The resulting portrait is of a man who is completely human but has been gripped unmistakably by the grace of God. His heroism is that of a man who lived his life “by faith in the Son of God, who loved me and gave himself for me” (Gal 2:20).

It’s true that there is some heady theological stuff in this biography. Most teens won’t have the background to really grasp all of it; however, Metaxas has done a nice job of making Bonhoeffer’s thought accessible to the lay reader. In fact, this ought to whet a reader’s appetite to read Life Together or The Cost of Discipleship. Much of the story is told using first person accounts and letters, which provide good context for understanding Bonhoeffer: he was an eminently practical theologian. And in fact, watching Bonhoeffer follow his convictions to the gallows at Flossenburg; hearing his final recorded words before his execution — “This is the end. For me the beginning of life.” — could there be a better way to learn about the power of the costly grace of God?